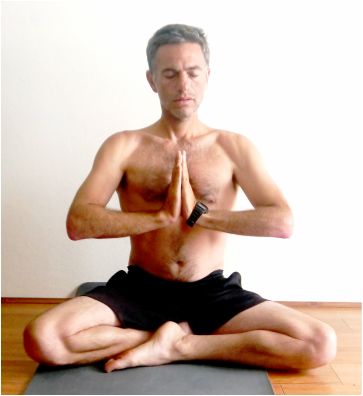 Fernando comes from a background of competitive sport. In his mid twenties he decided to start yoga as a mean to gain flexibility. He needed to contort his body while climbing rock walls.. It was the start of a journey that took him to work on a mat for many years.
The beginning was slow going. He used to attend his Iyenga style yoga class only once or twice a week as a complement for his main sporting activity at the time.
He later moved into mountain biking and the yoga stayed as a complement. Same thing happened when he took sea kayaking more seriously.
He changed countries, cities and teachers but yoga remained as a companion of his main sporting activity.
By 2013 he was practicing every day and eventually developed his own practice which he tries to maintain daily. During his journey he tried several styles of hatha from very powerful to very restorative. After breaking his neck in a bicycle accident in his late twenties yoga helped his to recover his former fitness. In 2016 he spent 5 weeks in hospital with pneumonia and several infections, after that he rediscovered the healing and restorative power of yoga, specially pranayama and meditation.

He decided to transform his passion about yoga and start helping others on this path almost by 'accident'. When his corporate job as an IT consultant came to a halt, the yoga center he was attending started a yoga teacher course. He now teaches mainly private classes around Sydney, where he lives.
He is fully certified with the Yoga Alliance at an RYT200 level (Registered Yoga Teacher 200hours). Yoga Alliance leads the yoga community in order to set standards, foster integrity, provide resources, and uphold the teachings of yoga.